How to Get Mucus Out of Baby Chest 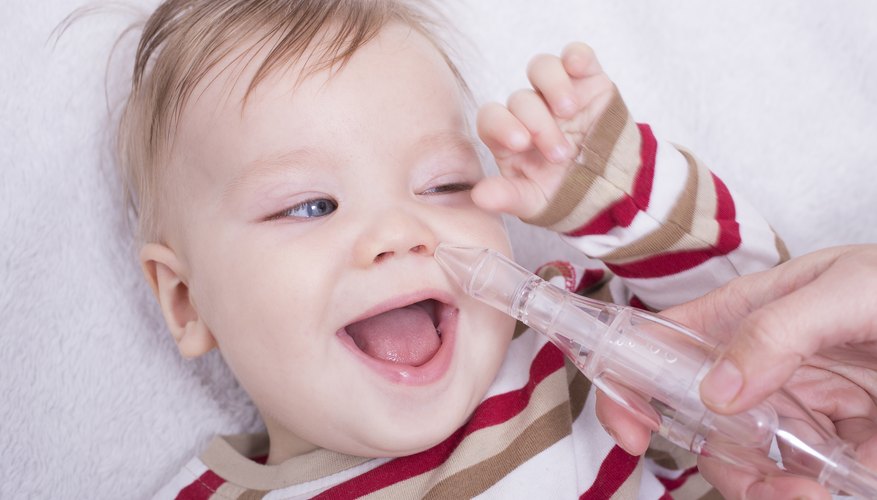 It's tough when your little one is sick. Your baby can't tell you what's going on, and he can't blow his nose or clear his airways with a good solid cough. Help your baby breathe easier when he has chest congestion with a variety of methods that help remove mucus from the airways.

Chest congestion is often a symptom of respiratory illnesses. It refers to excess mucus in the airways that makes it difficult to breathe. You might notice a rattling sound or wheezing when your baby breathes if her chest is congested.

For older kids and adults, chest congestion is annoying, but a few good coughs usually help loosen and clear the phlegm, at least temporarily. Babies can't cough up all that mucus because their chest walls aren't fully developed. Their coughs usually aren't as productive in getting the mucus out as your cough would. They need a little help getting the gunk out of their airways to make breathing easier and to avoid additional inflammation.

Create a makeshift sauna in your bathroom to help loosen the mucus in your baby's chest. Close the bathroom door, and crank the water to hot, with the shower running. That steam on the mirror may annoy you after your daily shower, but it can help your baby breathe a little easier. Sit with your baby in the bathroom for about 20 minutes. Do this up to four times daily to keep the mucus loose.

Patting on the Chest or Back

Another way to loosen the mucus, making it easier to remove it, is by patting your baby's chest or back. Pat him firmly on the back in the lung area. Use a cupped hand to pat while he lays across your legs, with his head positioned slightly lower than the rest of the body. This position helps the mucus run out of his airways. You can also pat your baby's chest firmly to help loosen the mucus. Combine patting with the steam treatment to double up on the mucus-loosening effect.

Additional fluids in your baby's body may help thin the mucus, making it easier to get out of her airways. If your little one is under 6 months, skip water and juice. Instead, try to offer more breast milk or formula to give her more fluids. Older babies can have some water and juice to thin the phlegm.

Use a Bulb Syringe

A bulb syringe helps suction mucus out of your baby's mouth and nose. If you can loosen the mucus enough for it to drain out of the airways, use the bulb syringe to remove it the rest of the way. Squeeze the bulb before putting it into your baby's mouth. Release the bulb with the tip toward your baby's cheek or the back of her throat. Be careful not to stick the tip down her throat or poke the tissues in her mouth with it. Squeeze the mucus into the bulb, and repeat the process if necessary.

If your baby also has nasal congestion, wash the bulb syringe before using it in her nose. Spraying saline solution into her nose before suctioning can help loosen the mucus. Squeeze the bulb before inserting the tip into her nostril. Suction by releasing the bulb.

Congestion often clears up on its own over the course of several days. If your baby seems to be breathing fine and his eating, drinking and activity levels are normal, you can continue treating him at home and monitoring him for any changes. If his breathing seems a little labored, but he's otherwise OK, call your pediatrician to ask if he needs to come in for a visit. Get your baby immediate medical attention if his breathing becomes very fast or if he has a lot of difficulty breathing. Other reasons to see the doctor include a bluish skin tone, high fever, significant decrease in activity or worsening symptoms.