How to Make a Catapult for Kids 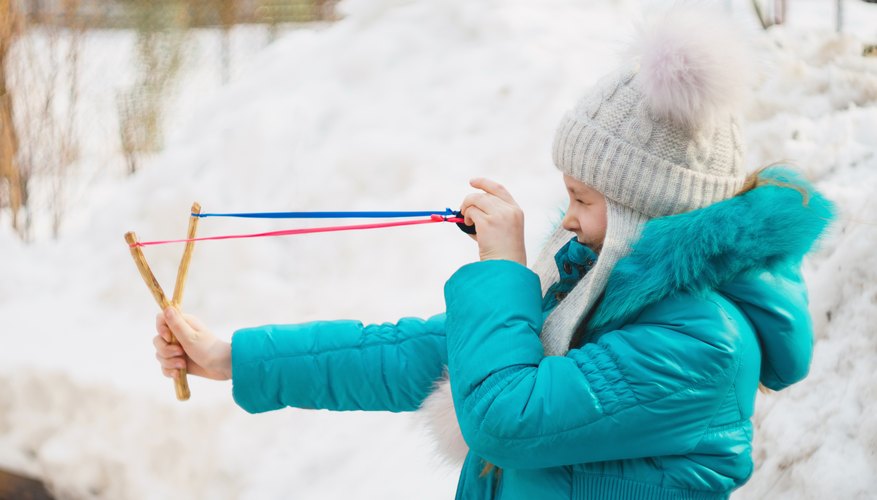 Since antiquity, children all over the world have played with homemade catapults. It’s no surprise that the simple toy has stood the test of time, as it’s fun for all ages to play with, both indoors and out. It helps develop hand-eye coordination, and it’s easy to make using only a few inexpensive materials. It’s educational, too, helping kids learn practical lessons about mechanics, math and physics. You can choose from several different DIY designs, most of which are simple enough for kids to help you make or, with a little guidance, create themselves. Lay down a few ground rules about appropriate projectiles, and children will have hours of fun playing catapult games and mastering their homemade machines.

A tabletop-style catapult sits flat on a hard surface and launches small, lightweight items into the air with an arc-shaped trajectory. You can play a game with the catapult by setting out cups or other targets on the tabletop and trying to hit them with the launched objects. To make a tabletop catapult, you need seven craft sticks, four rubber bands, a bottle cap and glue. Construct the catapult as follows:

Glue the bottle cap, flat-side down, close to the end of one craft stick. Set this aside so that the glue can dry while you assemble the base of the catapult.

Arrange five craft sticks in a stack. Secure the sticks together by wrapping a rubber band tightly around each end of the stack.

Place the craft stick with the cap glued to it on top of another craft stick. Wrap a rubber band tightly around the two craft sticks at the opposite end to the bottle cap.

Put It All Together

Open the two sticks of the launcher to form a V-shape with the bottle cap facing up. Slide the base (the stack of five craft sticks) into the V, perpendicular to the launcher. Wedge it in so that the launcher sits midway along the base. Secure the launcher and base in position by wrapping a rubber band around the point where they intersect.

To use the tabletop catapult, place a small item, such as a mini pom-pom, small ball of foil or a dried bean, in the bottle cap. Hold the base steady on the table with one hand, and with the other, press the launcher down toward the table. Release the launcher to send the projectile through the air.

A slingshot made using a forked, Y-shaped stick is a classic childhood toy, and it’s easy to make yourself. Send the kids out to search in a wooded area for a perfect slingshot stick—a sturdy, Y-shaped limb. You can trim the handle or forks with a small saw if necessary. You’ll also need two thick, strong rubber bands, a small rectangular piece of leather or felt, and some electrical or duct tape. Here’s how to make the slingshot:

To use the slingshot, hold the handle in one hand, and with the other, hold a projectile, such as a ball of paper, against the launcher. Pull the projectile and launcher toward your chest; then let go.

This type of catapult has a very simple design, but because of its size and mode of operation—you must step hard on one end to send an item flying on the other end—it’s best as an outdoor toy. It’s a good project for teaching the kids some very basic woodwork skills. You need a length of scrap wood, such as a 1 x 4, and a saw, sandpaper, screws and screwdriver.

Measure and Cut the Wood

Measure, mark and, with a saw, cut one long, rectangular piece of wood. Around 4 by 30 inches is ideal. Also cut two identical smaller pieces of wood, around 4 by 3 inches each. Smooth any rough edges with sandpaper.

Assemble the Pieces Together

Screw the Pieces Together

Hold the three layers of wood together and secure them with three or four screws. Make sure the screws go through all three layers.

To use the catapult, place it on the ground with the long-side up and the small base pieces acting as a fulcrum. Place a projectile, such as a beanbag, on the end of the catapult furthest from the fulcrum. Launch it by stomping on the short end.

Joanne Thomas has worked as a writer and editor for print and online publications since 2004. One of her specialties is parenting, and Thomas has penned pieces about craft projects for Disney, pregnancy and motherhood for Working Mother and Modern Mom, and after-school activities for Personal Creations, among others. Thomas resides in California where she is a working mother of two young boys. She holds a bachelor’s degree in politics from the University of Bristol, U.K.