How Much Weight Do Newborns Gain?

Making Sure Your Infant Is on Track 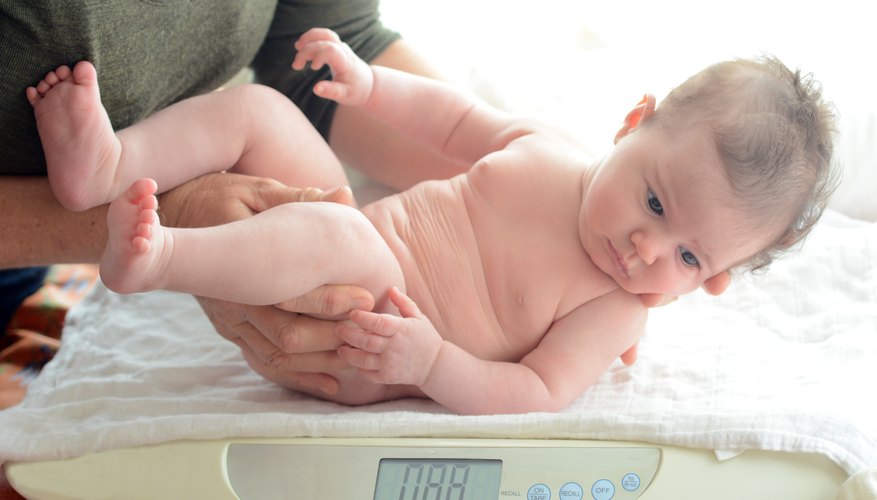 In a perfect world, your baby's tummy and thighs would steadily expand during his first few weeks of life, while yours would steadily deflate. But your pregnancy weight won't melt off overnight, and your newborn will probably lose weight before he starts to gain it. By the end of the first month, your baby probably won't weigh much more than when he was born—and that's completely fine.

Babies shed some of the fluids they're born with over the first week or so of life. During that time, they also tend to sleep a lot more than they eat, and their tummies don't hold much food. For all these reasons, most infants lose weight in the first days after birth.

Generally, formula-fed babies lose a little less (around 5 percent of their body weight) compared to breastfed babies (between 7 and 10 percent). Although nursing babies lose more than their formula-fed counterparts, a new mom's breast milk is nutrient-dense. Most babies can weather this weight loss without their health suffering.

Your newborn's weight loss should bottom off after the first week, and he should start to gain weight. Most newborns get back to their birth weight at around 2 weeks old.

During weeks three and four, the typical newborn will gain somewhere between 5 and 7 ounces per week. So by the end of the first month, your baby may be just about 1 pound heavier than he was at birth.

Normally, a baby's weight picks up after his first month. As both of you adjust to your feeding routine and your baby's stomach starts to grow, he'll start to ingest larger quantities of milk or formula.

After his first month, expect your baby to gain roughly 1 1/2 to 2 pounds per month for his first year. Most babies double their birth weight by 5 months and triple it by the first birthday.

These are just rough guidelines, though. Many perfectly healthy babies gain less or more weight than their peers. Several factors affect a baby's growth. For instance, premature infants don't adhere to "normal" weight gain patterns. Multiples usually weigh less than single babies, so they may also be slower to gain weight than singles. It's also normal for multiples to gain weight at different rates, so one twin may double her birth weight weeks before her sibling.

It's hard to accurately weigh your newborn at home unless you have a very precise scale, but you can still measure it week to week. Weigh yourself while holding your baby; then weigh yourself alone and calculate the difference.

It's not essential to weigh your baby at home, because his pediatrician will measure his growth at every visit. You should see the pediatrician at least twice in your baby's first month. The doctor will let you know if your child isn't gaining enough weight.

In the meantime, monitor your baby's eating habits and dirty diapers. Those are good indicators of whether he's developing normally. A newborn should eat about six to eight times in a 24-hour period and seem satisfied after each feeding. He should have six to eight wet diapers and at least a few bowel movements each day. If your baby isn't hitting those marks, call the pediatrician.