Can You Eat Shrimp While Pregnant? 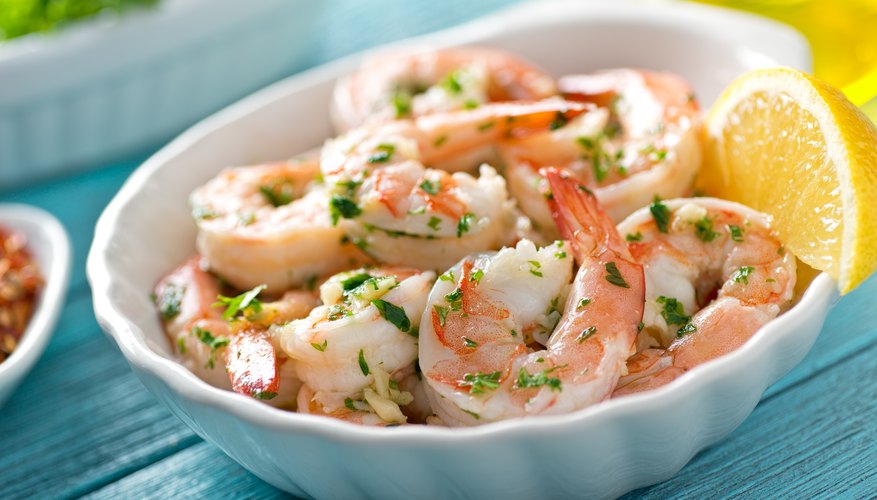 Your ankles are swollen, you always need to pee, and it'll be months before you can have a martini. Shrimp cocktail is the least the universe can give you, right? If you're like most pregnant women, you're rightfully nervous about eating seafood right now. And if you're longing for off-limits sushi, you'll be glad to know that shrimp is generally safe for pregnant women—in moderation.

The issue with eating seafood while pregnant is that some types have high levels of mercury. If you ingest too much mercury, it can harm your baby's developing nervous system. That's why doctors warn pregnant women to avoid king mackerel, shark, swordfish and tilefish, which are all high in mercury. Raw fish is also considered taboo for moms-to-be, not just because of mercury but because it can be tainted by harmful bacteria.

Shrimp contain small amounts of mercury, so they're safe to eat in moderation. Of course, if you eat nothing but shrimp, you'll ingest more mercury than is safe. Many doctors suggest pregnant women limit themselves to no more than 8 to 12 ounces of low-mercury seafood per week. That's equivalent to about two to three servings. Note that that's the recommended amount of total seafood consumption per week, so plan accordingly if you want to eat salmon, crab and other types of seafood in addition to shrimp.

However you choose to enjoy shrimp, make sure it's fully cooked. Raw shrimp is a no-go until the baby arrives. Be mindful to only eat shrimp that has been commercially caught, inspected and prepared. Freshly caught shrimp sold out of a beach shack on a tropical island might have been pulled out of high-mercury waters.

Can I Eat That?

Heaven help the person who tries to keep a pregnant woman away from a food she's craving. But while tortilla chips dipped in melted ice cream might be a perfectly safe, if gross, food combo, it's important for your safety and your baby's safety to know which foods are potentially dangerous right now.

Soft cheeses made from unpasteurized milk, raw sprouts, unpasteurized milk and unpasteurized juice are all potentially risky during pregnancy and should all be avoided. Salads from your grocery store's prepared food section are also dicey because they can contain listeria.

Lunch meat and smoked seafood might be safe to eat if you heat them to at least 165 degrees. Be wary of eating undercooked meat or eggs. Avoid anything containing raw or undercooked eggs, such as eggnog or cookie dough, because of the salmonella risk.

No two pregnant women are the same, and only you and your doctor can determine what's safe and appropriate for you to eat. Talk to your doctor about your diet at the beginning of your pregnancy. Your medical history and any pregnancy complications might make certain "safe" foods unsafe for you and your growing baby.