Can You Cook Frozen Pork Chops?

You Can Cook Frozen Pork Chops, But Allow Extra Time 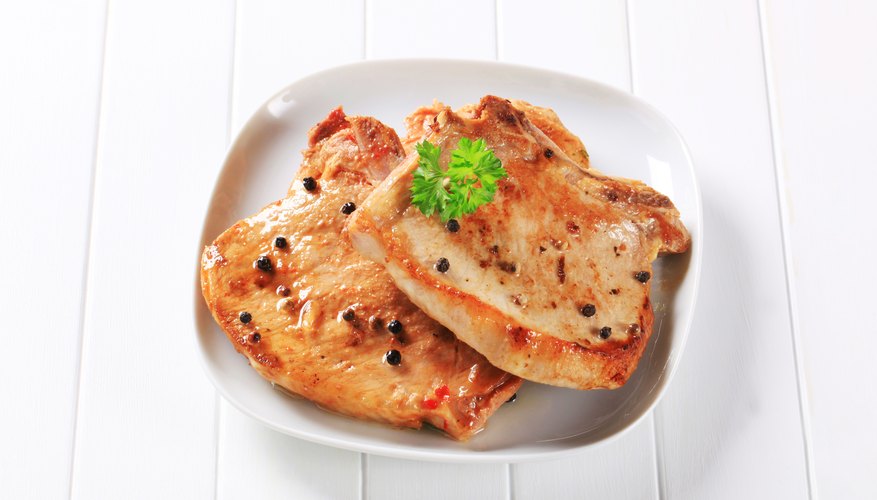 Defrosting frozen pork chops is simple enough, but it does take planning. If the day hasn't gone according to schedule and you're running late, you may be able to cook pork chops without defrosting them. It takes some extra time, and you'll want to be alert to their final temperature, but with care you can skip the thawing step altogether.

You can cook frozen pork chops the same way that you would cook thawed ones on the stove or grill or in the oven. Since you're starting from a lower temperature, you'll have to allow extra time for cooking. Consult the recipe you're using and add around 50 percent to the total cooking time. A slow cooker may leave the pork at an unsafe temperature for too long, so do not use a slow cooker if any portion of the pork is still frozen.

Because cooking times can be variable with frozen pork chops, it's very important to determine that your meat is at a safe temperature. Using a meat thermometer, check the chops' internal temperature; try to get as close to the center of the meat as possible to be sure that the middle of the chop isn't still cold or frozen. The temperature should be at least 165 degrees Fahrenheit to be completely safe. If you don't have a meat thermometer handy, test the chops by making a deep cut into them with a sharp knife and watching the juices that run out. If the juices are clear, the meat is done. If they have a pink tinge, the chops need a little extra time.

Cooking frozen pork chops is usually a sign that you're in too much of a rush to thaw them by traditional methods. However, it may be possible to defrost them in a way that still saves time compared to cooking them from their frozen state. While cooking frozen pork is faster than thawing your chops in a refrigerator or cold water bath, microwave thawing may actually save time. Each microwave oven is different, so check your manual for the appropriate power level and thawing time, but you may find that the defrosting time, which could be just a few minutes, is shorter than the extra cooking time for frozen pork chops. Once you've thawed the pork chops, cook them immediately; it's unsafe to leave them standing at their thawed temperature.

Dr James Holloway has been writing about games, geek culture and whisky since 1995. A former editor of "Archaeological Review from Cambridge," he has also written for Fortean Times, Fantasy Flight Games and The Unspeakable Oath. A graduate of Cambridge University, Holloway runs the blog Gonzo History Gaming.