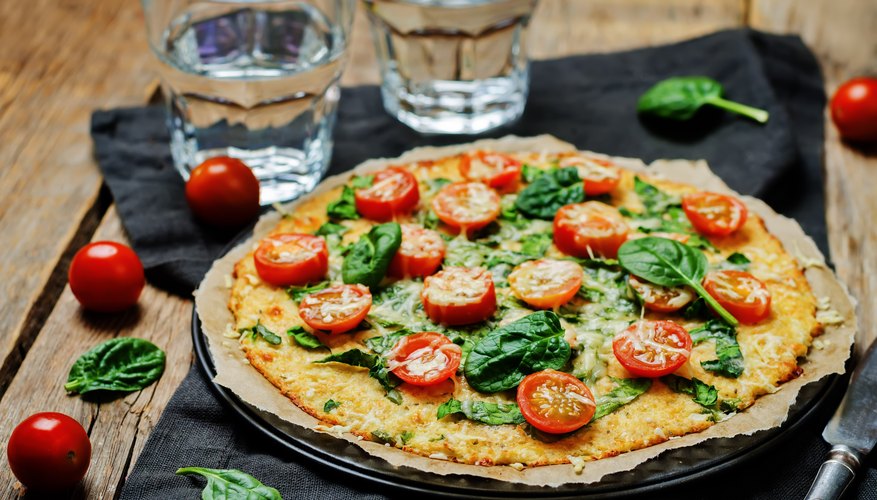 Cauliflower crust pizza is a tasty and healthy alternative to a traditional wheat crust, but it often features cheese and eggs to help it stay together. This vegan version uses ground flax and water as an egg substitute, chickpea flour as a binder and nutritional yeast in place of cheese. Although it doesn't taste like a classic thin crust, it's a great way to switch things up and add a serving of veggies to your pizza! Topped with fresh tomato sauce, vegan cheese and more roasted veggies, it's a healthy meal that's totally possible to make on a weeknight.

This recipe can also be used as a quiche crust or for mini pizzas. Simply press into a pie pan for quiche or separate the "dough" into 4 to 6 balls and press each ball into a small, thin circle for mini pizzas.

Your crust mixture may seem crumbly while it's still in the bowl, but it will begin to hold together after you dump it out and press it into a circle. A thicker crust will hold and stay together better but will take longer to cook. If you prefer a thinner crust, spread the mixture out to about 1/8-inch thickness and check it after 7 to 8 minutes of cooking time.

Carly Schuna has been freelance writing and editing for more than a decade. She enjoys putting a creative spin on pieces from her specialty areas of wellness, food and fitness, working to help people save money while maximizing their health. In recipe developing, she loves finding ways to put a healthy spin on the classics to boost nutrition for the whole family without sacrificing taste.