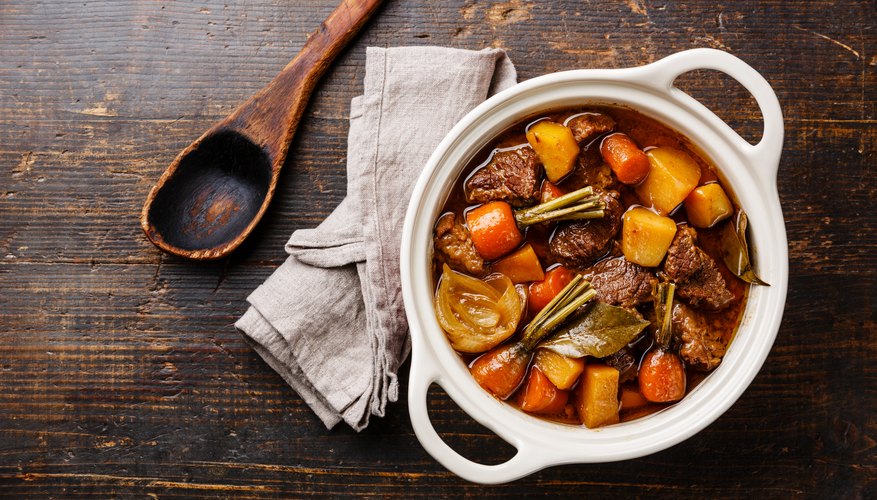 A slow cooker is a versatile way to make dishes ranging from soups, stews and chili to roasts and casseroles. It's particularly convenient because you can leave a dish to cook and use the time you save to look after the kids or take care of other tasks. If you're cooking beef in your slow cooker, you'll find that making some small changes to the way you prepare it will improve your results. These simple tips will help you create tender, flavorful beef in your slow cooker.

Cuts of beef with a higher concentration of connective tissue – brisket, chuck, shin and shoulder – are usually cheaper because they're tougher and seen as less appealing. Slow cooking, however, gives these cuts time to break down and soften, making them tender and bringing out their flavor. Try these cuts in dishes like beef bourguignon, a hearty stew traditionally made from beef shin, bacon, mushrooms and onions. Brown the beef, then fry the bacon, mushrooms, onions, garlic and herbs. Add tomato puree, then slow-cook the whole dish in its own juices and red wine for around 3 hours. Serve with mashed or roast potatoes.

Minimize the Amount of Meat

Slow-cooked beef dishes allow more time for the beef juices to impart their rich flavor to other ingredients. This means that it can be possible to reduce the proportion of beef in some recipes slightly, letting vegetables and other ingredients pick up the flavor. If you want to cut down on the amount of red meat your kids are eating and up their vegetable intake, this can be a useful way to do it. Slightly reduce the proportion of beef to other ingredients, and let the rest of the dish absorb the flavor of the meat.

Some slow cooker beef dishes are as simple as throwing the ingredients in the pot and letting them cook for hours. In other cases, however, you can greatly improve the flavor of the meat by adding an extra step. Browning beef in a pan for a few minutes before putting it in the slow cooker, by either just searing the outside of the meat or adding an outer coating of flour, builds up a caramelized crust and concentrates the flavor. Alternatively, if you're cooking a dish like a roast, you can sear it in an oven on high heat after it's done cooking in the slow cooker.

In a covered slow cooker, liquid doesn't evaporate to the same extent that it does in another dish, and fat that renders as you fry meat on the stovetop doesn't drain away either. Trim excess fat before you put meat in the slow cooker. And if you're using a recipe not intended for a slow cooker, leave out around a third of the liquid. In the same way, sauces don't thicken to the same extent that they do otherwise, so you might want to add a small amount of a cornstarch-and-water paste to thicken them toward the end of cooking.

Give Yourself Plenty of Time

For most slow cooker beef dishes, a long period at a low temperature is the best way to create a tender, flavorful meal. If a recipe calls for you to cook your meal on high heat, consider cooking it for a longer period on low heat. Long periods cooking on gentle heat give your beef time to soften and share its flavors with other ingredients. You can let a dish cook for hours, even while you go out and do something else. Some recipes will even call for cooking times of up to 6 or 8 hours or longer.

One of the great things about a slow cooker recipe is that you can get it started and then leave it to run. If you're making something like a stew or chili, you might be tempted to check back periodically and stir the pot. Avoid the temptation, though: Lifting the slow cooker's lid bleeds off heat, lengthening your cooking time. Most slow cooker recipes don't really require you to stir them; instead, they rely on proper layering of ingredients. If your recipe calls for it, do stir your slow cooker periodically, but try to do so quickly, leaving the pot uncovered for as little time as possible.

Dr James Holloway has been writing about games, geek culture and whisky since 1995. A former editor of "Archaeological Review from Cambridge," he has also written for Fortean Times, Fantasy Flight Games and The Unspeakable Oath. A graduate of Cambridge University, Holloway runs the blog Gonzo History Gaming.