Why is Acorn Street the Most Photographed Street in Boston?

A Little Street in a Quaint, Historic Neighborhood 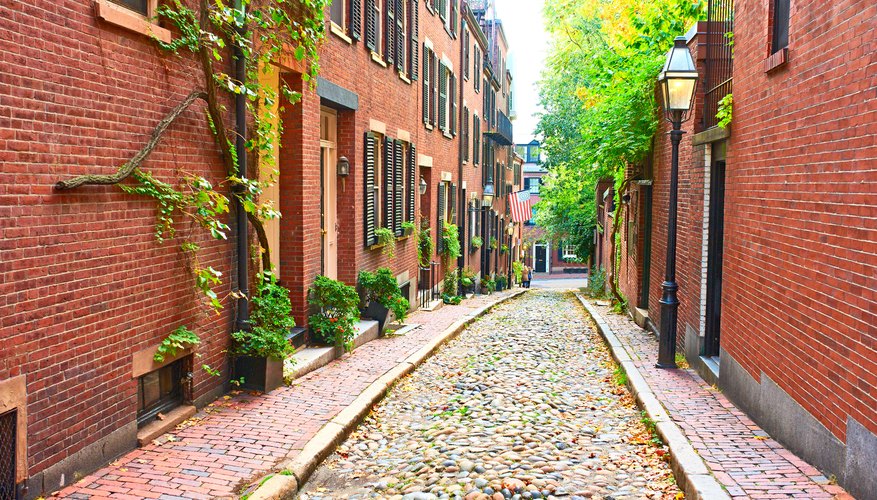 Boston is a modern, bustling city superimposed on a centuries-old town. There are a few locations where visitors can feel for a moment that they've stepped into a time machine, and Acorn Street in the Beacon Hill neighborhood is one of them. This narrow little street is one of the most photographed places in Boston—some say it's the most photographed street in the entire city. That alone should make it worth visiting, but even better news is that Acorn Street is surrounded by one of the most interesting (and historic) parts of Boston.

Where It Is and Why It's So Photogenic

The Beacon Hill area, one of the best-known historic districts in the U.S., is an affluent residential neighborhood bordered by Cambridge Street on the north, Somerset Street on the east, Beacon Street on the south and Storrow Drive on the west. The area retains much of its original Federal, Greek Revival and Victorian architecture in structures built from the early to mid-1800s. In the midst of all this is Acorn Street, a tiny one-block-long street with a fairly steep slope (Beacon Hill is aptly named) that runs horizontally between W. Cedar Street and Willow Street.

But what makes it so special? It is, in fact, one of the last places to still have actual cobblestones as paving material. Real cobblestones are rounded but irregularly shaped stones taken from the earth and used exactly as they are naturally formed. The soil of early Boston was loaded with these stones, known as "cobs." To work the land and build a city, the settlers needed to extract them and, if possible, put them to use. Thus began the process of "cobbling" the cobs into "cobblestone" streets. Original cobblestone streets are now rare and considered historic treasures. A street paved with these multi-hued, variously shaped historic remnants retains its original character and charm, and can be quite beautiful.

Acorn Street is one of the very few streets with its original cobs in place. You may have run across other locations that are described as cobblestone, but it's more likely that these streets are paved with "setts"—quarried granite that has been worked on to form a more level surface.

Why Were the Cobblestones Removed?

Cobblestones are beautiful, but they're not level, which is the main reason they have been almost universally replaced with setts. Cobblestones stick up out of the ground in uneven arrangements, much to the dismay of the horses and humans who have had to traverse them. Combine cobblestones with the steep slope of Acorn Street, and you have a recipe for disaster. Maybe that's why so many people talk about taking photographs of cobblestones rather than about the fun it is actually walking on them! They're just not practical.

Wear good walking shoes—no heels—for your journey to the past. The street is very narrow, so you won't be bothered by cars; nevertheless, smaller children shouldn't attempt to toddle in the street. Other members of your family will want to watch their step very carefully, too.

It might be difficult to get a shot of the street unless you don't mind including a lot of tourists also armed with cameras. Be patient. Go on a weekday in the late afternoon when the tourists begin to clear off. Try going right after a storm when the crowds are not as large, but the cobblestones are glistening. If you do want to take pictures of other people taking pictures, it's considered polite to ask their permission first.

If you want to get your family in the picture, they can stand with confidence on the brick sidewalk, which will give you a nice background of the rowhouses that line the street. In fact, these carefully maintained rowhouses are a large part of the street's charm.

Take shots from different angles and positions. Use a wide-angle lens to get a fuller picture. Try a shot from close to ground level with a foreground of cobblestones in sharp focus. Whatever you do, don't take just one or two pictures and consider yourself finished. No matter if you're a pro or an amateur, it makes sense to have several versions of a street-shot to choose the best for enlargement.

Time on Your Hands?

Maybe you're waiting for the tourists to go away. Or, maybe you've just shot a roll of film and are looking for something else to do or somewhere else to take pictures. And there you are, right in the middle of Beacon Hill, a neighborhood that covers less than a square mile. So take a stroll. For starters, you might go to the State House (24 Beacon St., Boston, MA) and admire its famous golden dome.

Now you're less than a hop, skip and jump away from the Boston Common (131 Tremont St., Boston, MA), where your kids can have fun at the Tadpole Playground and the nearby Frog Pond, just a few steps away. The area, close to the center of the Common, provides slides, swings, monkey bars, climbing equipment—everything a kid could want in a playground. It's fenced in to keep your little ones from wandering off on their own, so the kids can choose their own adventures in a safe place. There's even a carousel nearby and a water-splashing area where they'll get soaking wet if you don't watch out. Imagine: all those playing opportunities and whimsical frog statues too! Do keep in mind, however, that on summer weekends, the place is going to be very crowded.

Another Historical Treasure in Beacon Hill

Consider giving your children a history lesson they'll enjoy—do they know that Beacon Hill was a hotbed of abolitionist activism in antebellum America? Visit the Museum of African American History (46 Joy St., Boston, MA) and find out more about this fascinating chapter in American history. A recently restored African Meeting House, the museum was built in the 19th century by free black artisans in what was then a thriving African-American community. Exhibits at the museum have included a celebration of African-Americans in the history of Boston baseball, a commemoration of the Emancipation Proclamation and the black troops in the Civil War, and, speaking of photography, an exhibition entitled, "Picturing Frederick Douglass: The Most Photographed American of the 19th Century." The museum is open from 10:00 a.m. to 4:00 p.m. every day except Sunday, and a calendar of events is available on its website.

After all the walking, playing and history, you and the kids might feel in need of some refreshment. The Beacon Hill J.P. Licks (50 Charles St., Boston, MA) offers ice cream and frozen yogurt flavors you've never heard of as well as the old standbys. You can even find vegan options and a cup of good coffee for Mom.