Romantic Things to Do in Paris 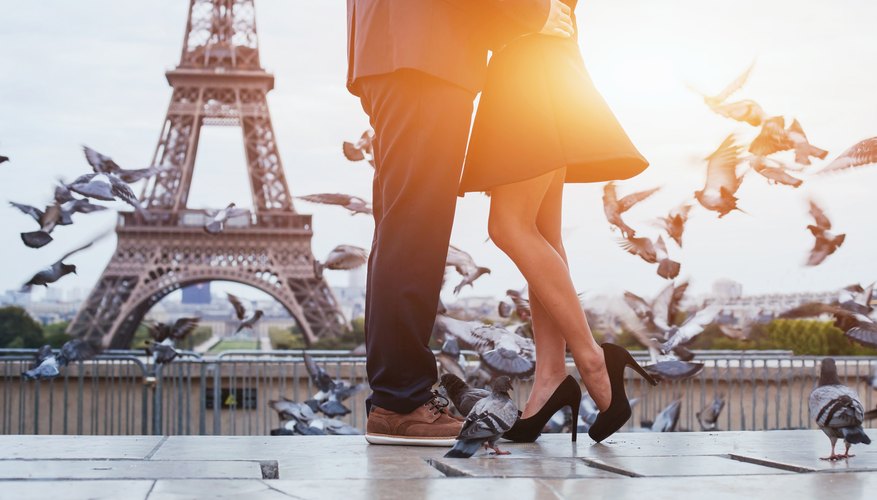 You've lined up a sitter for the kids so you can treat yourself to a romantic weekend away. Why consider anywhere but Paris? Every boulevard boasts buildings built before our nation was born and the very stones seem to exude a mysterious je-ne-sais-quoi. Whether you are visiting the City of Light alone or with a companion, enjoy romantic experiences at every turn.

Yes, the Eiffel Tower (Champ de Mars, 5 Avenue Anatole France, 75007 Paris) is a tourist attraction, but what summons all those tourists is worth seeing: the magnificent, incredibly romantic view from the top. Paris spreads out on every side, a living tableau of the most famous streets, cathedrals and parks in the world.

From atop the Tower, you'll see how the Seine twists like a snake through the center of Paris; you'll see the little Bateaux Mouches on the river, picking up passengers in front of this museum, letting them off in front of another. Over there on the Left Bank is Boulevard Saint Michel, the heart of the student quarter. The other side of the Seine, you'll see the splash of the Champs Elysees with its expensive, world famous shops.

Visit at night to watch thousands of gold lights light up the Tower as the stars come out. Ramp up the romance with a sip of bubbly at the Eiffel Tower Champagne Bar.

Is the Champs Elysees the most famous street in the world? Start at the Place de la Concorde (75008 Paris) and walk to the Arc de Triomphe (Place Charles de Gaulle, 75008 Paris). The wide avenue is lined on both sides with name-brand upper-crust stores like Louis Vuitton, Gucci, Hermes and Dior, as well as chic restaurants and upscale cafes with little sidewalk tables. But it's not entirely commercial. You'll find grand embassies here and presidential palaces, too.

If you happen to come at Christmas, the trees on either side of the Champs Elysees are draped with small blinking Christmas lights that make the fallen snow dazzling. On Bastille Day, expect hundreds of French flags. Whenever you come, stop for a glass of wine and watch the passers-by. You might see someone famous, you might see anyone at all.

Exploring the Palace of French Kings

The grand palace that houses the Louvre (Rue de Rivoli, 75001 Paris) was for a long time the royal residence in France, home to French kings and queens and one of the major backdrops to the dramatic history of the city and the nation. The Louvre sits near the Seine in the Right Bank.

Over 200 years ago, the Louvre became a museum. Today, it is the largest and most popular museum in the world, housing some of the most famous and romantic pieces of art in Europe. You'll find within its corridors Winged Victory, the Mona Lisa, the Venus de Milo, Eugène Delacroix's Liberty Leading the People and the Great Sphinx of Tanis.

Stroll through the ancient rooms, admiring the columns and high ceilings, taking in the art you want to see most. Don't worry about seeing it all. As evening falls, sit outside in the courtyard admiring the famous pyramid entryway designed by architect I.M. Pei.

Don't miss a boat trip on the Seine. The Bateaux Mouches circle the center of Paris, stopping to allow passengers to get on or off at famous neighborhoods and museums along the way. You won't find a better or more romantic way to see landmarks like Notre-Dame Cathedral (6 Parvis Notre-Dame - Pl. Jean-Paul II, 75004 Paris), Isle Saint-Louis, the Quai d'Orsay (1 Rue de la Légion d'Honneur, 75007 Paris), the Tour Eiffel, the Louvre, and all the beautiful Parisian bridges.

Paris is know for gorgeous bridges, but many call the Pont Alexandre III the most beautiful, extravagant and romantic bridge in the city. The Pont Alexandre III is a deck arch bridge that spans the Seine in central Paris, connecting the Champs-Elysees neighborhood on the Right Bank with Les Invalides (Place des Invalides, 75007 Paris), the site of Napoleon's tomb, on the Left Bank.

The Pont Alexandre III was built during the Exposition Universelle of 1900 and—with great views of the Eiffel Tower—it is a perfect spot for romantic sunset photos. Strolling across the bridge takes you through Paris’ premiere open-air museum. Admire the many detailed sculptures of lions, cherubs, fish, scalloped seashells, and sea monsters while Art Nouveau lamps provide soft, romantic illumination.