To the Sun, Wind and Sky: Raise a Glass With Your Sweetheart 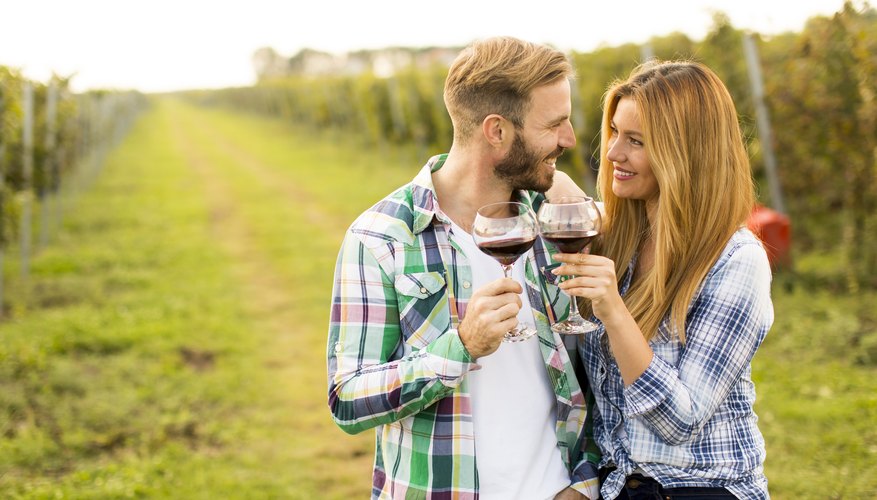 You've made all the arrangements to get away from the kids for the weekend and you want to make the most of those precious alone moments with your sweetie. If you're in Oregon, you're in luck. This diverse state caters to romance with its sweeping coastal views, high mountain deserts and picturesque wine country.

Astoria in the Mists

In Astoria, the Columbia River plays a sweet violin. Saunter along the Riverwalk or take the historic trolley along the same route to watch crashing waves, listen to honking sea lions and hear seagulls caw. Fall asleep to the sound of foghorns as ships navigate the Columbia River Bar and head up to the port of Portland. Anytime of the year is a great time to be in Astoria because snuggling with your honey while a storm rages outside is every bit as romantic as sitting on the deck of a cafe with a glass of wine, drinking up summer sunshine.

Climb the Astoria Column (1 Coxcomb Dr., Astoria, OR) to the 125-foot-high platform with its 360-degree view of the ocean, the river and the Coast Range. Climbing the column's inside spiral staircase to the top is free, but parking is $5 per car.

As a prime fishing port, Astoria hosts an array of fish-n-chips spots, as well as other excellent eateries, breweries and coffee shops. Check out the Bridgewater Bistro (20 Basin St., Astoria, OR) for an affordable, but classy meal. For coffee, head downtown to Astoria Coffee House (243 11th St., Astoria, OR) or to Coffee Girl (100 39th St., Astoria, OR) located on Pier 39 in the oldest cannery building on the West Coast.

In summer, Astoria is abuzz with visitors and events. Lodging is more expensive, so make plans early if that's your season to travel. Farmers markets, art walks, the Astoria Music Festival and the Scandinavian Midsummer Festival are mainstays of the summer season here.

Edgefield, the McMenamin Brothers flagship property east of Portland in Troutdale, is a 74-acre treasure trove waiting for you and your sweetheart. One of many historic properties under the McMenamin umbrella, Edgefield (2126 SW Halsey St., Troutdale, OR) is an all-inclusive resort with a hotel, restaurants, pubs, a winery and a distillery, a saltwater soaking pool, a theater, a golf course—and that's not all. The Concerts on the Green feature a robust schedule honored as the best outdoor music venue of 2016 by the readers of the local Willamette Week. Room rates vary depending on the season. In summer, a room with a common bath peaks at $150, but in winter, you can get the same room for about $100, or a room with an ensuite bath for about $150.

Visit Edgefield anytime of the year. If it's snowing or raining, you won't mind—just hunker down in a basement pub or in the distillery with its roaring pot-bellied stove. If you're hankering to have a picnic at an outdoor concert, however, visit in June to September.

Hood River on the Rushing Columbia

There's nowhere else like Hood River in Oregon. Uniquely situated in the Columbia Gorge on the river's edge and at the base of perpetually snowy Mt. Hood, Hood River raises the curtain on some of the most beautiful sunsets and sunrises you'll ever see. Just one hour east of Portland, the small downtown features quaint coffee shops, breweries, winetasting venues, hip eateries and many charming shops.

In spring or fall, tour the 35-mile Fruit Loop (2665 Reed Rd., Hood River, OR), aptly named because Hood River is the nation's largest pear-growing region. The Loop incorporates farm stands and u-pick fruit, flowers and lavender, in addition to multiple wineries. Take a picnic lunch to the Hood River Waterfront Park (Portway Ave., Hood River, OR) or to Marchesi Vineyards (3955 Belmont Dr., Hood River, OR) where you can buy a bottle of wine to quaff with your lunch.

Bend in the High Desert

Crisp, high-mountain air and endless sunny days—not to mention a historic downtown and gorgeous natural surroundings—make Bend a great weekend getaway. Late spring, summer and early fall are definitely best. Bend experiences an average of 33 inches of snow annually, and chances are good it will make things difficult for you in winter.

Bring hiking shoes or bike to make the most of Bend, as it has a plethora of outdoorsy things to do. Visit Smith Rock State Park (Terrebonne, OR) to hike or just take in the canyon and jagged-peak views. An all-day parking pass is $5. Drive the Cascade Lakes Scenic Byway, a 66-mile stretch that winds through alpine lakes and volcanic formations. Take a tour of the downtown breweries on a bike, and as the day winds down, be sure you're at Crux where the sun sets behind seven Cascade mountain peaks. Picnic in Bend's historic downtown Drake Park (777 NW Riverside Blvd., Bend, OR) where the Deschutes River flows through famous Mirror Pond. In summer, enjoy free Sunday summer concerts at the Les Schwab Amphitheater (344 SW Shevlin Hixon Dr., Bend, OR).

For lodging, check out Bend Vacation Rentals for a range of studios or cabins from $55 per night and up. Alternatively, splurge at the Riverhouse on the Deschutes (3075 N Hwy. 97, Bend, OR) where luxury rooms start at $199 and move up fast.

Romance is what wine country is for, and where best to appreciate those vineyards of green in spring and golden vines ripening in late summer than in the Willamette Valley, home to more than 500 wineries. Willamette Valley breaks into distinctive southern and northern regions, but to get away from the crowds, head south where the South Willamette Wine Association has 23 wineries ranging from hip urban locales to sumptuous estates commanding majestic views.

Most wineries are off the Lorane and Territorial highways just a few miles of glorious countryside east of Eugene. Stay in one of the city's affordable and comfortable B&Bs, like the Campbell House Inn (252 Pearl St., Eugene, OR), the Oval Door (988 Lawrence St., Eugene, OR) or the Excelsior Inn ( 54 E 13th Ave., Eugene, OR). Splurge (just a little) and stay right in wine country at the Lanzarotta Bed and Breakfast (29179 Hamm Rd., Eugene, OR), where each of the three rooms was built from yew and Douglas fir wood, cut and milled on the 40-acre property.

Take a picnic lunch to any winery except King Estates (80854 Territorial Hwy., Eugene, OR), which has its own restaurant. For the most sweeping views, try Sweet Cheeks (27007 Briggs Hill Rd., Eugene, OR) and Sarver (25600 Mayola Ln., Eugene, OR), both on hills with stone patios and balconies overlooking the countryside. Another great choice is Chateau Lorane (27415 Siuslaw River Rd., Lorane, OR) with a charming, shaded deck with tables and chairs lakeside.

Lynne Pettus has worked in the communications field for more than 20 years, most recently as a technical writer and editor in the software industry. She has a Bachelor of Arts in journalism from USC.